You are here: Home / Yousef Shirzad 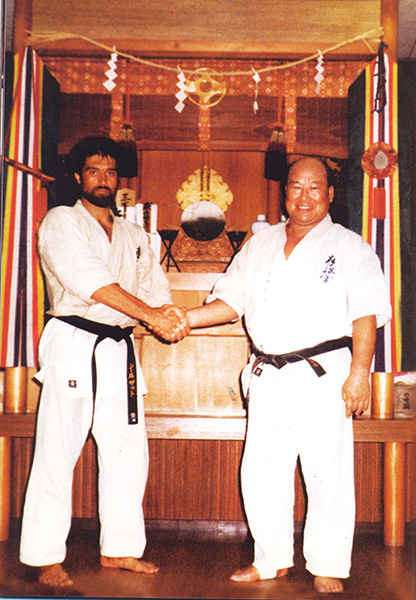 1– I Yousef Shirizadeh (known as Shirzad) was born in January 01, 1950. Started practicing karate in summer of 1963, and practiced different styles of karate for 10 years.

3– In 1975 the first Kyokushin karate championship took place and I was attracted towards this style after watching the event, as this kind of martial art was my ideal style.

4– In 1976 I was introduced to the late Sosai Oyama by Mr. Soto Hagino, the Chairman of Japan-Ireland air lines (JAL) and after corresponding which took place with the late Sosai Oyama, I was allowed to cooperate in Kyokushin style and I received some films, books, and posters related to Kyokushin karate style.

5– In 1977 I traveled to Japan for one month in order to practice Kyokushin karate.

6– In summer of 1979 I was invited to Japan by the late Sosai Oyama, which I stayed in Uchi Deshi for 3 months and participated in the summer camp and also achieved my 3rd Dan after taking the Dan exams, and finally signed a contract of representing Kyokushin karate in Iran with the late Sosai Oyama.

7– In the autumn of 1979, I took the Iranian team to participate in the 2nd World Kyokushin karate championship held in Japan.

8– Before Sosai Oyama passed away, I regularly participated in masters & representatives spring camps held in (Yugawara), and I also traveled to Japan every year in order to practice in Honbu and also take part in Japanese tournaments and every 4 years when I took the Iranian team to participate in the world championships I also attended in the referees contests.

9– After the death of the late Sosai Oyama (OSU!) I established Shirzad Kyokushin (Shinzen) karate in Iran.

This site is under construction and will be available soon